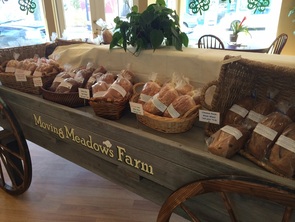 Our bakery really began decades ago when our farm kids were growing up. Mama Hudson made whole wheat bread almost every day. A friend said, "you should sell your bread," to which Mama replied, "nobody wants to buy my bread!" Well, the rest is history as they say and in November of 2013 our whole grain bread bakery opened on Davis Street in Downtown Culpeper. The owner of the building graciously allowed us to transform the space adding a full kitchen.

Cinnamon buns and cookies were quickly added and could be smelled down on the next block as customers and other store owners informed us. Who doesn't like the smell of baked goods containing cinnamon?!

At first, the highlight of our bakery was the flour mill that we had shipped here from Austria. In the summer of 2014, using the tracking number we were able to "watch" the trek of our flour mill as it made it's way through Europe and then across the Atlantic Ocean. Some still remember the excitement as we posted on Facebook and had customers "watch" it with us as we updated its whereabouts. Farmer Wally had done extensive research and discovered that American made mills mill the flour hotter and faster creating loss of nutrition as the high heat destroys important components of the grain. So he found this mill for us which is still in operation today. You can come by the bakery and ask Farmer Wally to run the mill for you to see.

Wally mills the flour and then it is immediately transferred the flour to the mixing bowl to begin making the dough. Using this Just-in-Time milling, oxidation of the flour is minimized before being made into bread providing two important benefits to our customers--nutrition and flavor!


BREADS: made exclusively with fresh organic flour; stone ground daily here at our store.        ​
Other bakery items available:  Made with the freshest, healthiest ingredients we can find... in keeping with our tagline, "Feeding Friends Like Family." All baked goods made with our own Moving Meadows Farm fresh eggs.